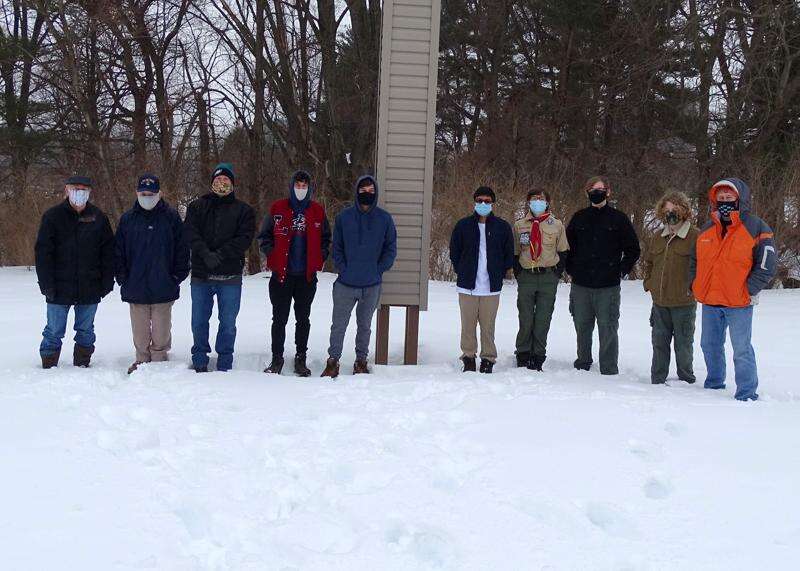 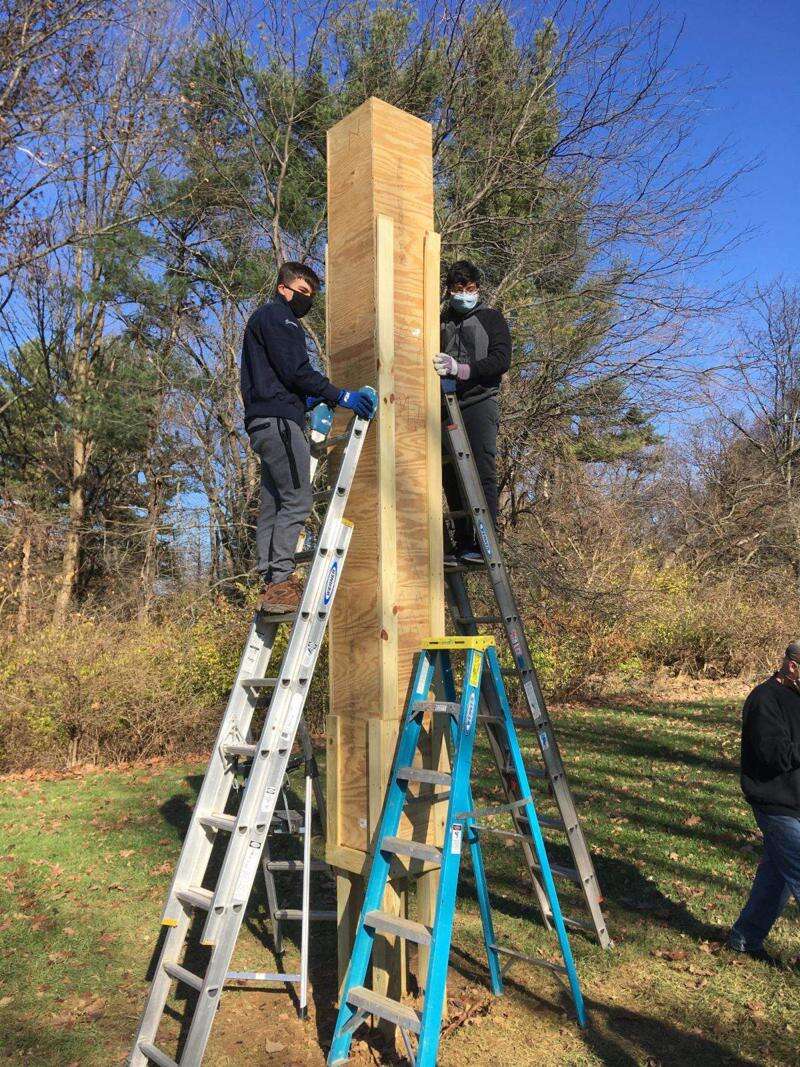 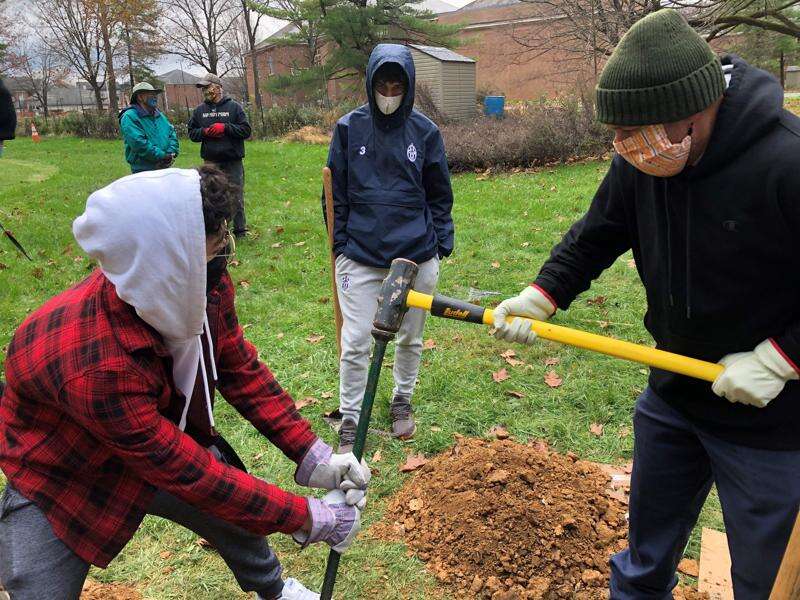 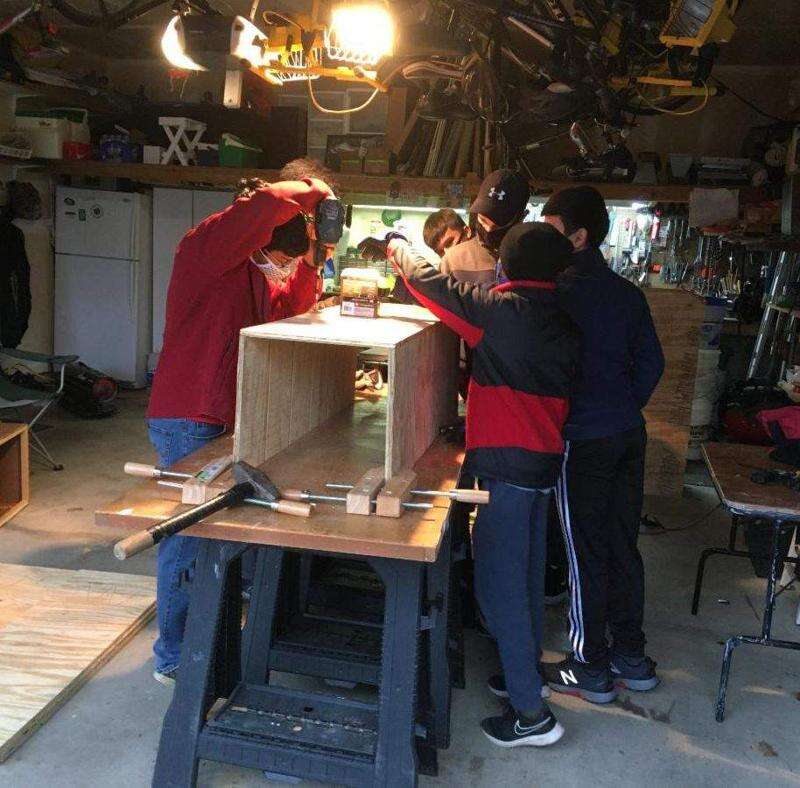 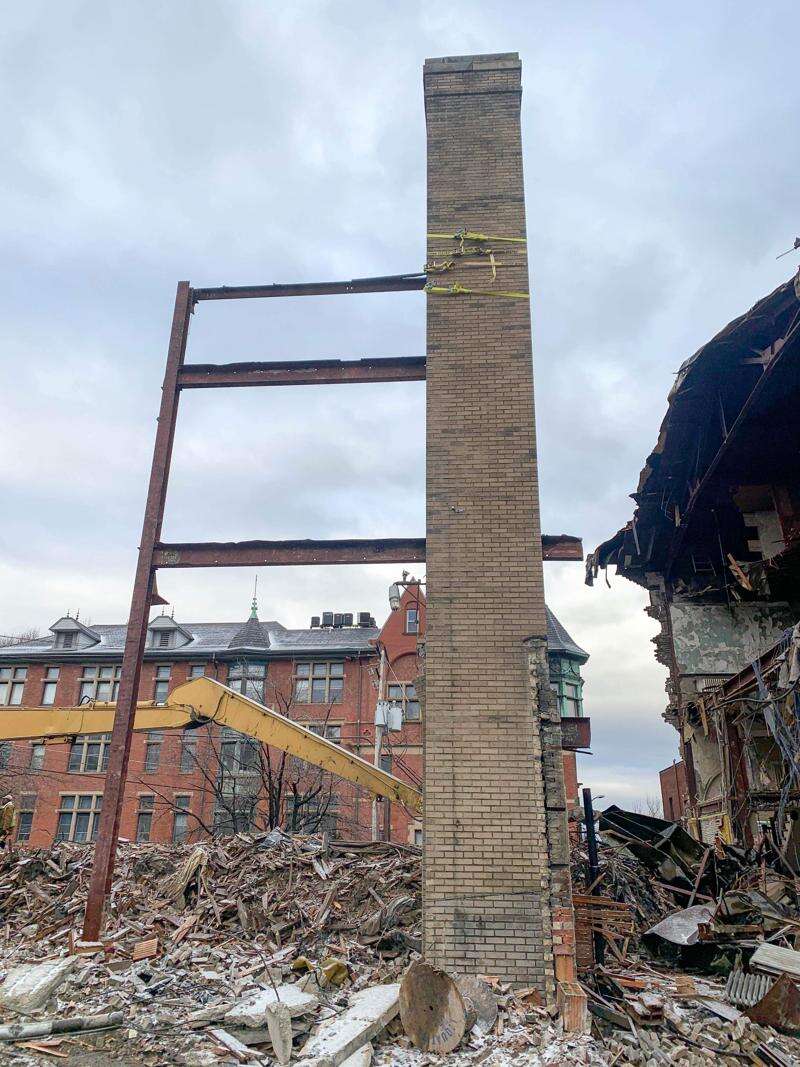 by TAMI QUIGLEY Special to the Bethlehem Press

Never let it be said that chimney swifts are “flighty” birds – they seem to know a good thing when they see it, and Bethlehem consistently seems to be a great place to roost in their birds-eye view.

A large number of swifts have been using the main chimney of First Presbyterian Church as a nighttime roosting place. Several months ago, Eagle Scout candidate – now Eagle Scout - Elijah Sivick, son of Charlie and Lori Sivick and a member of the church’s Boy Scout Troop 302, took up the idea of building a chimney swift tower on the church property at 2344 Center St. as his Eagle Scout project.

The chimney swift is a medium-sized, sooty gray bird with very long, slender wings and very short legs. Like all swifts, it is incapable of perching, and can only cling vertically to surfaces. They build a bracket nest of twigs and saliva stuck to a vertical surface, which is almost always a human-built structure, typically a chimney.

After the church greenlighted the project, Sivick and his family and friends got to work, guided by plans and information for the building of a tower for the birds provided by Scott Burnet, habitat community chairman of the Lehigh Valley Audubon Society (LVAS).

The 16-foot high, 2-foot wide completed tower stands tall on the north side of the church property, near the community garden. The project came to fruition thanks to a total of over 150 person-hours, including the planning and write-up.

The tower will provide alternate nesting space for the hundreds of chimney swifts that nest annually in the church’s chimney.

Masters said the church’s chimney is large and constantly warm year round. There are two large gas fired water heaters that continually use the chimney for exhaust purposes.

“To the best of my knowledge the chimney will not, nor should it, be capped,” Masters said.

“When the swifts return some of them may take up residence again in the chimney. Hopefully, some will take to their new ‘crib,’ eventually movin’ on up to the north side.”

“We have also let it be known that should any future Eagle Scout candidates choose to add to the first tower, it would be most welcomed,” Masters said.

“Our chimney houses a roosting flock of migratory birds, which includes singles and nesting pairs that have finished raising their young. Towards the end of the season, we have somewhere in the range of 4,000-plus birds before they migrate to South America,” Angione said.

She noted the 4,000 number was a rough calculation of the roost size done by the LVAS in 2011.

“Swift towers house a single nesting pair of birds. Nesting pairs also struggle to find suitable housing,” Angione said. “First Presbyterian values all creation, great and small, recognizes the contributions the swifts make to our environment and the important role they play in maintaining the delicate balance of life.

“I first noticed the mesmerizing acrobatics of the swifts in the fall of 2009, but long-time members tell me that the swifts were here long before that,” Angione said.

Angione said the church contacted the LVAS several years ago about the swifts to learn more about the species and how they could protect them and peacefully coexist. It was through LVAS’ helpful education that church members learned about the benefits of building swift towers.

Seeing that the project “would benefit the troop’s charter and help to protect birds in need of a new habitat, I took up the idea and got approvals to begin on the project,” Sivick said. “From the day I met with Don and Rebecca, it took roughly three months to complete, but the construction itself took a little less than a month.

“My family supplied the money for the project, because fundraising would’ve taken too long to fill out forms and have extra meetings. I turned 18 in December and aged out of Scouting, so completing this before Dec. 20 was a huge priority. My father and I got the materials for the project. The other scouts assisted in building the project. I had multiple workdays and many scouts and adults from my troop helped me to complete this project,” said Sivick, a senior at Liberty HS.

Sivick said his family was allowed to work on the project, and he headed up most of the planning.

“My father, who has experience as a handyman, told me what would work best and how to go about doing it, and on workdays I told scouts and leaders alike what work needed to be done and they assisted in completing,” Sivick said. “Scoutmasters and adults usually oversaw the scouts and stepped in occasionally.”

Sivick’s parents Charles and Lori, Masters and Angione were among the adults who helped in person, and Burnet helped with the planning.

Troop Committee Chair Randy Stonesifer, scoutmaster Sam Phillips and Jason Hendrickson, an assistant Scoutmaster, were among those adults from the troop who helped with the project. Other adults involved with the scouts who helped in person include Sylvan Wenrich, Bill and Robbie James and Dr. Hiralal Rana.

“All of Troop 302 helped with my project, and those who weren’t in person still assisted me,” Sivick said.

Burnet is the chimney swift expert in the Lehigh Valley and beyond, and has built more than 100 chimney swift towers. When Sivick contacted the LVAS, his request was forwarded to Burnet, as the towers are “in my wheelhouse,” he said.

Burnet supervised Elijah throughout the construction but could not help him do any of the work because the work has to be done by the scouts.

“I gave him an overview of what he needed. It was a good fit for his project and will help the birds if the chimney is capped in the future,” said Burnet, who will soon mount an educational sign with information about the chimney swifts on the tower. “We’re quite happy with the tower, it turned out very well. Everyone should be very proud.”

Burnet described the swifts as “a unique bird biologically and anatomically. They are amazing.” When Burnet first found out 20 years ago that people were building towers for the swifts, he got on board right away and hasn’t stopped since.

Jennie Gilrain, member of the LVAS, said the swifts are only in Pennsylvania April to September. All the swifts migrate to South America for the winter. The numbers vary in the chimneys during the spring, summer and early fall.

The church’s sponsorship of Boy Scout Troop 302 began in November 1917, the longest continuous sponsoring relationship of a Boy Scout Troop in Bethlehem. First Presbyterian was established in 1875, and the present building on Center Street was completed in 1957.

Troop Committee Chair Randy Stonesifer said though the records are incomplete, he found names of 128 scouts in the troop who have earned the Eagle rank since the founding in 1917. “In the past 10 years, 32 of our scouts have earned Eagle,” said Stonesifer, adding the troop currently has 27 registered scouts.

Stonesifer said the term sponsor is an easily understood way to express the relationship; however, being the chartered organization is the technical term of the Boy Scouts of America.

Carol Burns, communications manager at First Presbyterian Church, said the scouts provided the church with a video to share during services, which are virtual only on Facebook Live. In the past, scouts have served as ushers.

Across town, the swifts were recently in the news concerning their roost in the large chimney of the Masonic Temple at 202 Wyandotte St. in South Bethlehem. The Masonic Temple is currently under demolition as part of a redevelopment project, prompting property owner and developer John Noble and the LVAS to work together to save the urban habitat that houses thousands of chimney swifts each fall migration.

The two options were to reinforce the existing 40-foot-high, 5-foot square chimney as a stand-alone structure or to build a duplicate replacement, freestanding structure on the site. The goal is to have the work completed by spring migration in April.

“The Masonic Temple chimney was finally freed from the building Jan. 27 and is now standing alone with steel beam supports. So far so good,” said LVAS’ Jennie Gilrain.

“The task remains to stabilize the structure – a considerable feat – but John Noble and company are working confidently and faithfully to save the birds and their original roost,” Gilrain said.

The LVAS has swooped in to help, agreeing to raise money to help with the cost of saving the roost through the Save Our Swifts GoFundMe Charity https://charity.gofundme.com/o/en/campaign/save-our-swifts. As of March 1, $8,225 of the $50,000 goal had been raised by 124 people in one month.

Bethlehem City Council voted Feb. 2 on the resolution by Olga Negron and William Reynolds to name the chimney swift the official Bird of Bethlehem. The resolution said, in part, the swifts “have been living in our community since the Industrial Revolution, for more than 100 years.”

Gilrain, a fourth-grade teacher at Freemansburg ES, said four of her students read letters on the phone during the public comment section of the council meeting.

Gilrain noted a council member saw one of Burnet’s towers in a park and recommended building some in Bethlehem – that idea definitely takes flight with Burnet.

Ironically, there is another type of connection between the swifts at First Presbyterian and the Masonic Temple. Masters became a member of one of the lodges that met at The Masonic Temple in 1970, becoming master of the lodge in 1998, and later appointed as a District Deputy Grand Master in 2007.

Yes, the swifts in Bethlehem certainly seem to have something to crow about regarding their great choice of roosting spots for generations in The Christmas City.