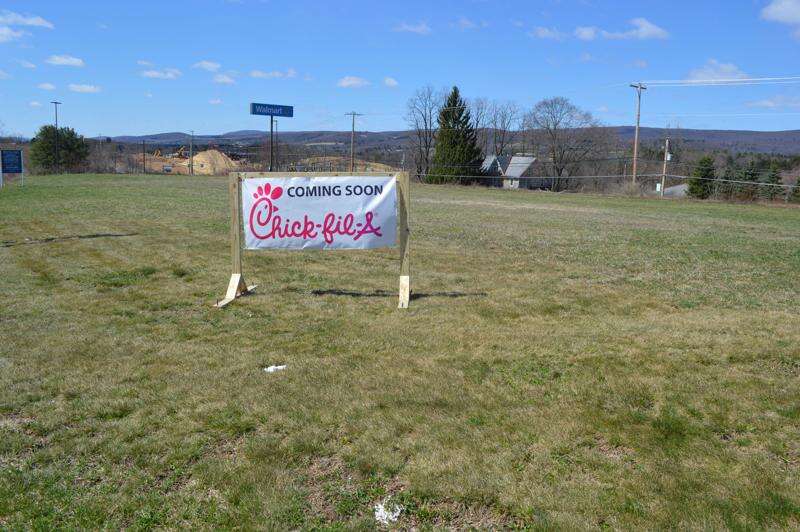 A Chick-fil-A is set to join an ever-growing line of fast-food restaurants in Mahoning Township.

The fast-food chain would be located on a pad site owned by Walmart at 1731 Blakeslee Blvd. Dr. E.

It would be the first Chick-fil-A franchise in Carbon County. Menu items include chicken sandwiches, chicken nuggets, chick-n-strips, sides, salads and breakfast meals.

A sign on the pad where the restaurant would be built could be observed Friday by motorists traveling to Walmart.

Chick-fil-A would follow in the footsteps of Wendy’s, which opened just over two months ago along the Route 443 corridor.

Bennett, who said he is not involved with the development of the Chick-fil-A, believes it’s quite the catch for the county.

“It will be welcomed into an outstanding community, and they have an excellent product and business ethic,” Bennett said. “They will be cattycorner from Mahoning Self Storage, and we welcome them to the neighborhood.

“I love their chicken sandwiches.”

Bennett said the 443 corridor continues to grow by leaps and bounds.

“It shows how valuable frontage on 443 is, and also tells you that Carbon County is a large enough market to justify a Chick-fil-A, which normally only goes into much larger markets,” he said. “So, I’m sure our population is going to grow to meet their expectations at Chick-fil-A.”

Bennett said he believes a Chick-fil-A can only serve to further bolster the strip that in addition to Wendy’s already includes an Arby’s, Taco Bell, McDonald’s and Burger King.

“This is a game-changer for all development in the county,” he said. “It’s exciting where Carbon County is going with all of our growth.”

Bennett said he wishes nothing but the best for the property owners.

“It’s darn exciting news, because Carbon County will benefit from their presence because other major brands will look to be on 443,” he said. “And although I lost my property, I hope other property owners benefit from this additional exposure.”

At present, the Lehigh Valley Hospital-Carbon is being built on land cattycorner to the Walmart Superstore on Blakeslee Boulevard.