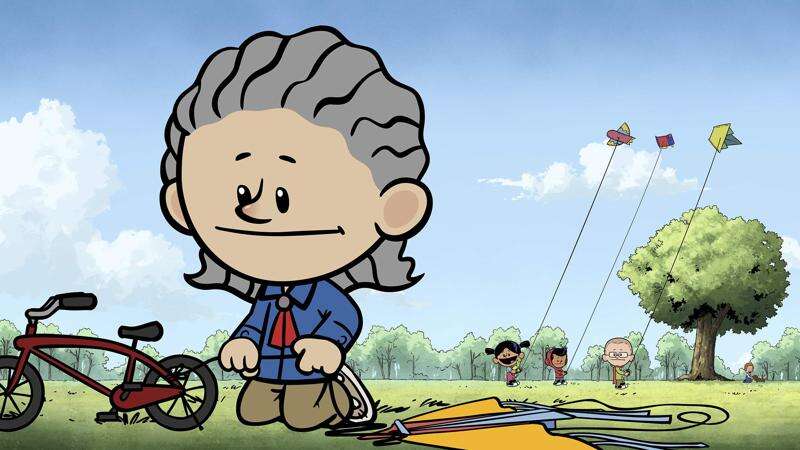 NEW YORK (AP) - A new child is introduced this month on the animated TV show “Xavier Riddle and the Secret Museum” who is a little different. He’s sensitive to loud noises and he likes doing things his way, in his time.

Ben is autistic and he helps teach the show’s regular cast about acceptance. “People think and do things differently. And that’s OK,” says star Yadina after learning about Ben’s specialness.

The 11-minute episode has the blessing of no less than Temple Grandin, the professor at Colorado State University and trailblazing spokesperson for people with autism.

In the episode, the three friends Xavier, Yadina and Brad go to their secret museum and back in time to meet Grandin as a child to better understand her condition and how to make a connection with Ben.

“It was wonderful. Absolutely wonderful,” Grandin said recently via Zoom. “I think things like this show are really good on educating elementary school kids about differences and inclusion.”

On “Daniel Tiger’s Neighborhood,” viewers are introduced to Max, who avoids loud sounds and is comforted by a heavy blanket. He likes buses and bugs and plays to his own rhythm. “Some things about him are different than you,” a teacher explains.

“We’re excited for him to premiere and hopefully more kids will feel represented through our show. That’s a big reason, I think, behind doing this,” said Chris Loggins, supervising producer of “Daniel Tiger’s Neighborhood,” from Fred Rogers Productions.

The PBS Kids’ animated series “Hero Elementary” last year introduced a diverse group of four superhero students who are learning to master their special powers, including the character of AJ Gadgets, who is on the high-functioning end of the autism spectrum. AJ doesn’t like loud noises or wet clothes or to be apart from his beloved backpack. But he’s part of the team and always comes to the rescue.

Max, AJ and Ben represent autistic children on the spectrum, but the vastness of the range of developmental abilities means they can’t portray all children. The creators hope that even if the characters don’t match up one-to-one with the viewer, they can at least offer representation.

Max represents the first time an autistic character has been highlighted on “Daniel Tiger’s Neighborhood,” and the creators consulted autism experts and child development specialists. He fits neatly into an ongoing theme of the show which teaches that all people have unique needs and that friends can help.

“It was important for us to introduce this character, Max, authentically and with care, but the social and emotional message of the episode I think can apply to all of us,” said Loggins.

For Grandin, she got a kick out of being represented on “Xavier Riddle and the Secret Museum” alongside other heroes of history like Marie Curie, Neil Armstrong and Eleanor Roosevelt. “I’m really honored to have such esteemed company,” she joked.

Her episode shows her unique empathetic approach to understanding animals and her special way of flying a kite - attaching it to a bicycle. She notes that she’s a visual thinker and autistic people are often natural fixers.

Mark Kennedy is at http://twitter.com/KennedyTwits

This image released by PBS Kids shows an animated Temple Grandin, foreground, as other characters Yadina, from background left, Xavier and Brad fly kites in a scene from “Xavier Riddle and the Secret Museum.” The episode, premiering on April 5, is one of several ways PBS Kids is shining a spotlight on characters with autism during Autism Awareness Month. (PBS Kids via AP)
Tags:
Family , Health
Trending Now