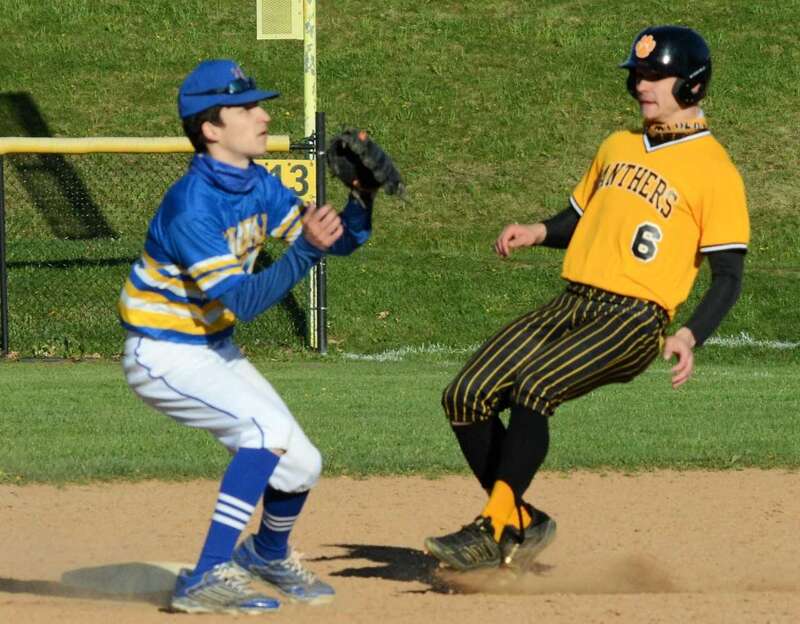 Marian was doing its best to make life miserable for a Panther Valley team that was on the top rung in Division 3 of the Schuylkill Baseball League.

After seasons of dominating the division, this has not been the year of the Colts. But anytime these two rivals get together the records become a moot point.

That was the case Friday as Marian threatened to pull the upset.

Much to its credit, however, Panther Valley found a way to win.

The Panthers did that by putting together a pair of late inning rallies, and then escaping a bases-loaded, seventh-inning jam to pull out a 7-5 victory.

The win enabled Panther Valley to stay two full games ahead of Shenandoah Valley in the division race as it improved to 13-3 overall and 7-2 in league play. Both the Panthers and Blue Devils (5-4) have four league games to play.

“Baseball is a game of ups and downs,” said Panther Valley manager Richie Evanko. “Hey this is Marian-Panther Valley ... anything can happen. I thought the way that (Brian) Hinkle pitched was one heck of an effort for them.”

The teams were deadlocked at 4-4 after three innings as both teams took advantage of some shaky fielding by their opponents.

It took until the home fifth for Panther Valley to get back into the driver’s seat.

Johnny Byers was the key as he fueled a two-run rally when he singled and came around to score when Mike Pascoe drilled a shot down the third base line. Pascoe, however, was caught in a rundown for an out, but he had tied the game at 5-5. Stephen Hood kept the fires burning with a walk and he would eventually score on Chase Weaver’s hit to put PV in front.

In the sixth, the speed of Louie Clouser gave Panther Valley an insurance run. Clouser hit a grounder to short and then blazed down the first baseline for an infield single. He stole second and then tagged up and moved to third on a fly ball to center. Sweet swinging Byers then brought him home with a single to center.

Panther Valley was in front, but not necessarily in control as the Colts made a bid to rally in the seventh.

Matt Martin got his team’s hopes fueled when he shot a single to center. Joe Walko then reached base on a strike out wild pitch .

Stephen Hood seemed to settle down and struck out the next batter, before Hinkle reached base loading the sacks. But Hood calmly wiggled out of further troubles dashing Marian’s hopes for an upset.

“I’m not satisfied, but there were some really, really good signs,” Marian coach Tony Radocha said. “(Hinkle) did a heck of a job for us. We got some kids to buy in and we made it close. Now we’ve got to carry this over until the end of the season.”

COLT CLUBS … Marian lashed out a pair of doubles in its seven-hit attack, one each by Martin and Chase Petrilyak, who also singled. Dante Agosti was a tough out as he reached base three times and scored twice. Jake Chulock singled twice and Luke Walser added one hit.

BLOWN’ IN THE WIND… The winds were blowing up to 40 miles per hour and made the temps feel well below what the thermometer read. Both teams had adventures trying to get underneath fly balls.