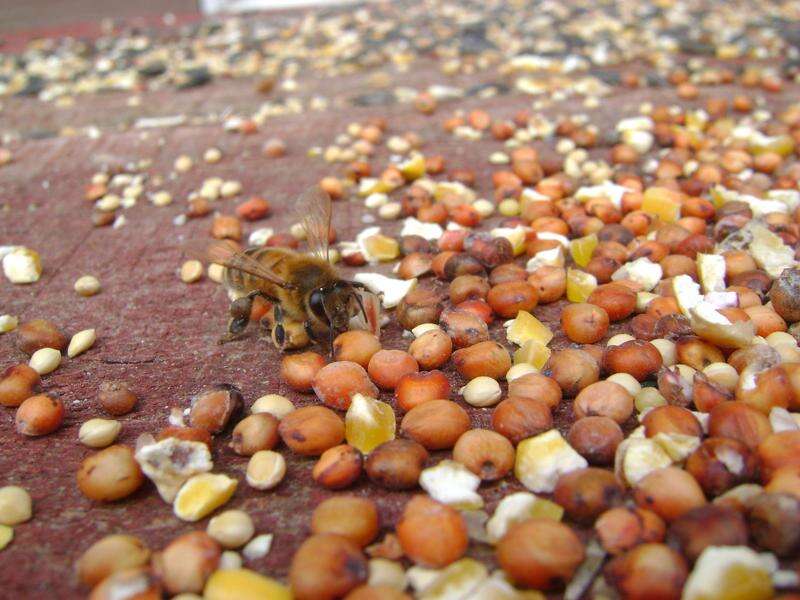 he other day my boss, Susan Gallagher, looked out the window at the bird feeding platforms and, getting to her feet, she said, “That is so cool!”

Of course, everyone got up to look at whatever was happening outside the window.

There were honeybees all over the bird feeding platforms, busily collecting something. They were fanning the birdseed with their wings, and as the chaff blew around, the bees were collecting it.

We were all stunned to see because none of us had ever seen anything like this happen before.

Honeybees are smaller than bumblebees, which are still hibernating underground this time of year and don’t emerge until much later.

The honeybees were a bit fooled by warm weather and ventured out to look for food. They don’t hibernate, instead the worker bees surround the queen and form a winter cluster with their bodies and stay inside the hives when the temperatures dip below the 40s. They flutter their wings and shiver to keep the inside temperature of the hive warm.

In order to keep from shivering, the bees must maintain their energy by eating honey, pollen and bee bread they have stored in the hives.

When bees fly around collecting pollen for food, the pollen gets deposited from plant to plant and pollination occurs.

Honeybees will collect pollen and nectar using these resources for food and for making honey. These carbohydrates give bees the energy they need to thrive. Some of the pollen collected is turned into “bee bread” and that helps them grow.

It’s a mixture of pollen, nectar and honey. This is the main source of food for honeybee workers and larvae. The combinations are endless because the bee bread depends on what plants the bees have foraged from.

Even though corn is not typical food for honeybees, they will take advantage of any food source they find.

The days prior to this event were warm enough to allow bees to fly and search for food, but with no flowers available they feed on whatever they can find. The bees weren’t eating the corn; instead, they were collecting the pollen-sized dust particles found in the cracked corn and other seeds for the birds.

Once the flowers start to blossom the bees will move on to that food source.

Having never seen anything like this before and after a few searches online I discovered we were not the only ones who have witnessed this behavior.

A mild winter may cause the bees to start foraging before there is enough food available. Because they are so opportunistic, they’ll collect anything they think they can use for food.

While there is a little bit of pollen on the corn it is not in the same amounts they would get from flowers. All that matters to the honeybees is the corn chaff looks like pollen.

Bees have incredible eyesight. Using this eyesight they can search out flowers based on color and shape, but they are also looking for pollen as well.

The corn’s pollen, it was like hitting the lottery. Sometimes, foraging bees will come back with sawdust or other particles that look like pollen. Obviously eating pollen is a good thing and eating sawdust … not so much!

I just read the most intriguing and disgusting article about bees, spotted lanternflies, and the connection between the two.

Here is the link to the article: www.atlasobscura.com/articles/unusual-honey-pennsylvania.

A way to help the bees who are out foraging early is offer dried fruit, cracked corn or grain sorghum (milo) in bird feeders when there are no flowers available to provide pollen.

Another way to help is by putting out pollen patties. I will have to do some investigating to find out what they are exactly and where I can get them.

Sometimes it does not pay to be an early honeybee!

The bees weren't eating the corn; instead, they were collecting the pollen-sized dust particles found in the cracked corn and other seeds for the birds. Once the flowers start to blossom, the bees will move on to that food source. JEANNIE CARL/SPECIAL TO THE TIMES NEWS
Trending Now