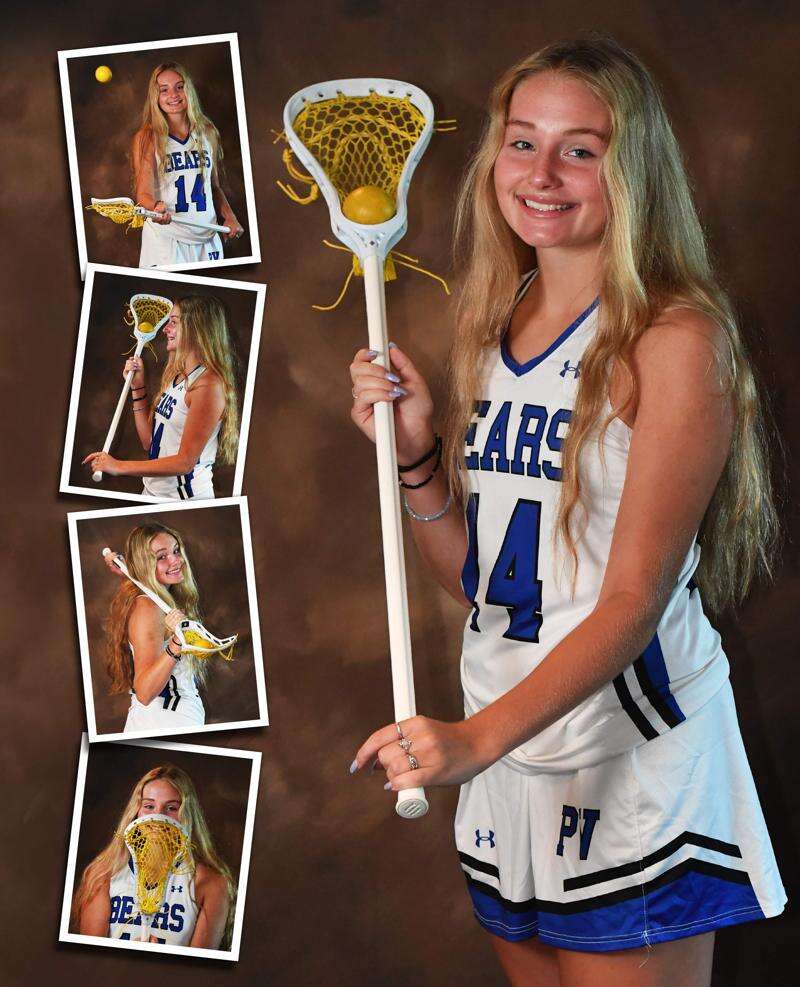 Alexandra Bush extends both her arms to show the scars and bruises.

For the Pleasant Valley junior, they are a badge of honor.

Girls lacrosse is technically a noncontact sport, but that’s not reality.

Players get hit with sticks, bodies collide, and injuries happen.

In a way though, Bush likes it that way. After all, one of her favorite parts of the game she has grown up playing most of her life is its physicality.

“I really like the intensity (of the sport) and the aggressiveness,” said Bush, who started playing when she was in kindergarten. “When I play, I’m a pretty aggressive player. I have bruises all over my arms from it.

“It’s a pretty sport to watch, how quickly the ball moves and just being able to catch the ball in that tiny, little stick, but it’s a hard sport to learn ... But what I love most is the aggressiveness; the amount of teamwork you have to have in order to get the ball in the cage.”

Putting the ball in the cage is something the PV midfielder did quite often this past season. Despite playing a limited schedule - 13 regular season games and three postseason contests - Bush finished the year with 79 goals and 29 assists. She also helped her team post a 10-6 record, and gain a victory in the District 11 quarterfinals against Parkland.

For of her efforts, Bush has been named the Times News/Lehigh Valley Health Network Lacrosse Player of the Year.

“I was really excited (to hear I won this award),” said Bush, who has 147 career goals and hopes to reach 200 next season. “It’s exciting being able to put that on my recruiting page. It was something nice to hear, especially since going to PV, we don’t get that much credit when it comes to lacrosse.”

With no other schools in Monroe County having the sport, the Bears face competition mainly from the Lehigh Valley.

But despite what she may think, Bush has been recognized for her play - especially on draws.

“I would say draws are her biggest strength,” said Pleasant Valley head coach Toni Bush, who is also Alexandra’s mom. “We have had coaches come up to us and say, ‘I can’t do anything against her (on the draw)’. They try everything they can and she’s just that good at the draw.

“Draw control is crucial in girls lacrosse. It just automatically gets you possession. It’s really helped our offense having her on the circle.”

For those not familiar with lacrosse, draws occur at the start of each half and after each goal is scored. The two basic draws are a push draw and a pull draw. It’s an important part of the game, and an area where Bush specializes.

“I usually take the draw, which is my favorite part of the game,” said Alex. “I’m better at the pull draw and usually win it. That’s my go-to draw. That’s what colleges are looking at me for - my draw.”

While her senior season still awaits, it’s not too early to think about the next level.

It’s always been a goal of Bush to play at the Division 1 level. For years she has competed with her club team (T3); has gained instruction from high-level lacrosse coaches; and has done sessions with college players. She recently made the prestigious Philly 1 squad, going through multiple rounds of tryouts to earn a spot on the highest of their five teams.

“I try to get distinguished honor roll every marking period, and I need good grades to go to the colleges I’m looking at,” said Bush, who has a 4.0 GPA.

“I’m hoping to go D1 or a high level D2 ... I’m looking for more of a city environment, and I really want to get to know the coaches and players there, because when you go to a D1 school they become you’re family. You’re with them all the time.”

Speaking of family, her mother has been on the sideline for all of her varsity games, and knows how important the PV program and her teammates are to her daughter.

“You can put Alexandra in any position on the field and feel confident that she is going to take care of things. She is a superstrong defender. She’s a very strategic player. She doesn’t do things without thinking about them. She’s kind of like our quarterback on offense, and she’s very vocal on the field.”

Bush is also vocal about winning next year, her final one at Pleasant Valley.

“I’m hoping we can make it to district finals and hopefully win,” said Bush. “We had a very young team. We had five starting freshmen. We have a few freshmen coming up that are good. And then the freshmen from last year will have a year of experience. I just want to get to the district finals my senior year, especially since we didn’t have a season my sophomore year.”