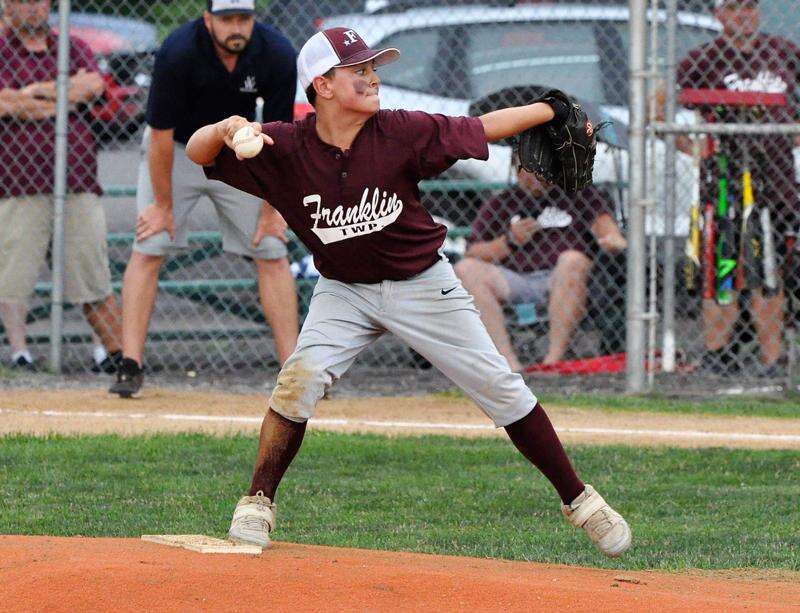 COOPERSBURG – It looked like lights out for Southern Lehigh after the Franklin Township all-stars came roaring out of the chute in the top of the first inning of Sunday’s do-or-die game in the Section 6 8-10 Little League tournament.

The Maroons, who rolled to a 12-1 victory against East Stroudsburg on Saturday to advance to Sunday’s loser’s bracket final, felt poised and confident and made a statement early. Unfortunately for FT, the momentum it established quickly went astray.

Southern Lehigh was just as determined, erupting for eight runs in its half of the first to take the lead. It never looked back in registering an 11-5 victory to eliminate Franklin.

The first inning showed that baseball, indeed, is a funny game.

After Ethen Laible, Brian Mriss, Alex Kish and Garrett Utrata collected singles, and Brock Atwood and Carter Spotts were hit by pitches, the Maroons had built an early 4-0 advantage.

But there was still plenty of baseball left to play.

Southern Lehigh hadn’t had its turn at the plate yet, and when it did, it capitalized.

The winners sent 12 batters to the plate in the home first, which was highlighted by a two-run triple off the bat of Braylon Showalter (one of two hit he would hit in the game), to take an 8-4 lead.

“Hey, our kids battled; they did a great job,” said Franklin Township manager Ben Moyer. “I thought that first inning was so important the way we started, but give them credit, they answered.

“You know we came in here and a lot of people were questioning us. They were saying ‘Where are they from?’ Our players were right there, they never backed away and they showed how good of team we really were.”

The Maroons definitely left an impression on the diamond at Living Memorial Park.

Even when they fell behind 9-4 after the host team added a run in the second on singles by Tommy Roth and Lucan Magazzo, Franklin countered with a tally in the fifth as Spotts singled with one out and came around to score on a pair of errors. That kept the game still in doubt, as the lead was only four runs.

But Southern Lehigh added on, putting up two more runs in the home third thanks to a Declan Walsh single, Showalter’s second triple and a sacrifice fly by Sammy Moscato.

“We just couldn’t get the momentum back the way we did in that first inning,” Moyer said. “I can’t say enough how we stayed in it. They got some (timely) hits.”

Like Moyer said, Franklin could never regain any more momentum, as Austin Showalter kept the Maroons off the board the rest of the way, punching Southern Lehigh’s ticket to the final round against Council Rock Newtown.

HITTING AWAY … Southern Lehigh collected nine hits in the contest, three more than Franklin Township. Walsh finished 3-for-4, driving in two runs and scoring three. Mriss led Franklin with two singles and an RBI. Owen Moyer drove in a run for the Maroons, as did Kish.

SNAGGING ‘EM … Everyone had to admire the play of Franklin’s Moyer at the hot corner. He made a pick in the first that wooed the crowd. Catchers Mriss and Atwood were outstanding as battery mates, while shortstop Laible also was solid in the field. FT also turned a double play in the fifth. Mriss threw out a runner trying to steal after his teammate Atwood struck out the batter.

Brian Mriss, Garrett Utrata and Carter Spotts combined to pitch a one-hitter as Franklin Township rolled to a 12-1 victory Saturday over East Stroudsburg.

The winners exploded for six runs in the third inning to turn a narrow 3-0 lead into a 9-0 bulge.

Ethan Laible had two hits and scored a pair of runs for FT, while Owen Moyer doubled and crossed home twice. Spotts added a hit and three runs.

At The Movies: Very ‘Old’ school