At The Movies: Very ‘Old’ school 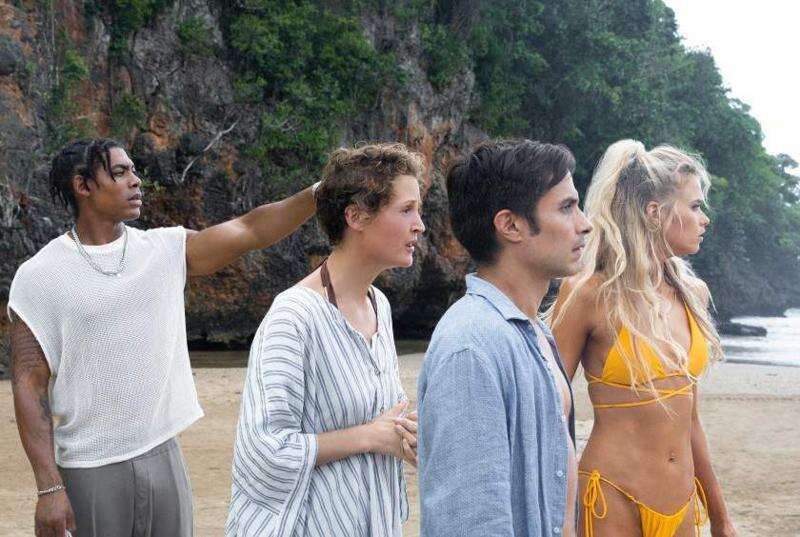 Key to this, of course, are the visuals. Shyamalan, collaborating again with director of photography Mike Gioulakis (“Glass,” “Split”) creates a clarity and quirkiness often emblematic of an independent non-Hollywood studio film with extreme close-ups, unusual framing and unpredictable camera angles. The tremulous soundtrack by Trevor Gureckis enhances the film’s off-kilter vibe.

“Old” has the tone of an Alfred Hitchcock psychological thriller, not unlike “The Birds” (1963) when nature seems to be in revolt.

The cause of, so to speak, “Let’s Do The Time Warp Again” is never really explained in “Old,” nor was the reason for the avian attacks in “The Birds” ever fully explained.

That’s OK. I enjoy an Egg MacGuffin at any time of day, in any year, in any film.

“Old” has elements of “The Lord Of The Flies” (1963), but with adults, and Agatha Christie’s “Ten Little Indians” (1965), for its disappearing couples, here thrown together as if on a secluded beach at a Sandals resort that more and more looks like “Jurassic Park” (1993). Instead of attacking birds or berserk dinosaurs, we have vacationers with preexisting conditions.

Shyamalan (with a small but pivotal role in “Old”) has again fashioned a nifty genre mash-up of place and psyche where the place becomes the psyche.

A structural problem with the film, typical of screenplays where a character or characters age through the decades, is that several characters in “Old” are each played by several actors, portraying the characters at different ages.

These are key characters. Though it’s titled “Old,” the screenplay by Shyamalan based on “Sandcastle,” a graphic novel by Pierre-Oscar Lévy and Frederick Peeters, emphasizes the young people in the storyline. Hence, the irony. Hence, the intensity of the plot dilemma.

The character matches, though excellent, are distracting. The movie-goer hesitates in the mind’s eye and wonders, “Oh, isn’t that?” or “Gee, what age is the character now?”

It’s especially distracting when the premise is about sped-up aging. Dwelling on the differences in characters at the different ages takes the movie-goer right out of the film. It takes away from the film’s otherwise enchanting mood.

That’s four actors playing one character. Each is excellent.

That’s three actors playing one character. Each is excellent.

Again, three actors play one character. Again, each is excellent.

Kudos to Shyamalan and the casting director for matching the characters. The three characters are key to several plot points.

Trent and Maddox are son and daughter of Guy Cappa (an excellent nuanced performance by Gael García Bernal) and Prisca Cappa (an intriguing Vicky Krieps).

The large cast adds to the confusion.

The screenplay provides several requisite moments to please the most avid horror movie fan. One scene I viewed between my fingers over my eyes.

“Old” is no day at the beach. Ultraviolet radiation can cause DNA changes in the skin, leading to premature aging and skin cancer.

“Old” is the first M. Night Shyamalan film without a Philadelphia locale for the Penn Valley, Lower Merion Township, Montgomery County, native who lives with his wife and children on a Philadelphia area estate. I had hoped the Cappa family would have embarked on their island getaway from Philadelphia International Airport. “Old” was filmed in the Dominican Republic. Shyamalan’s daughter Ishana was second unit director. His daughter Saleka wrote the song “Remain,” heard at the end of the film.

“Old” was seen on a sunny mid-day afternoon at the Movie Tavern Trexlertown, where I have been checking out the recently-reopened lounge, which displays photographs of Lehigh Valley natives or residents who became movie celebrities.